Well this tutorial has been a long time coming. Neural Networks (NNs) are something that i’m interested in and also a technique that gets mentioned a lot in movies and by pseudo-geeks when referring to AI in general. They are made out to be these really intense and complicated systems when in fact they are nothing more than a simple input output machine (well at least for the standard Feed Forward Neural Networks (FFNN) ).  As with any field the more you delve into it the more technical it gets and NNs are the same, the more research you do into them the more complicated architectures, training techniques, activation functions become. For now this is just a simple primer into NNs.

There are many different types of neural networks and techniques for training them but I’m just going to focus on the most basic one of them all – the classic back propagation neural network (BPN).  The back propagation refers to the fact that any mistakes made by the network during training get sent backwards through it in an attempt to correct it and so teach the network whats right and wrong.

This BPN uses the gradient descent learning method. Trying to describe this simply at this point is going to be difficult so I’ll leave it for a bit later, all you need to know is that it’s so called because it follows the steepest gradient down a surface which represents the error function as it tries to find the minimum of the error function and by doing so decrease the error.

I wanted to skip over the basics of neural networks, and all that this is your brain and this is a neuron but I guess it’s unavoidable. I’m not going to go into great detail as there is plenty of information already available online. Here are the wiki entries on FFNNs and back propagation:

This is the second version of the tutorial since half way through the first one I realized that I needed to actually go over some of the theory properly before I could go over the implementation and so i’ve decided to split the tutorial into two parts: part 1(this) will go over the basic theory needed and part  2 will discuss some more advanced topics and the implementation.

Now I havent even told you what a Neural Network is and what is it used for. Silly me! NNs have a variety of uses especially in classification or function-fitting problems, they can also be use to create emerging behaviour in agents reacting to environment sensors. They are one of the most important artificial intelligence tools available today. Just for the record I am by no means an expert on neural networks, I just have a bit of experience implementing and successfully using BPN’s in various image classification problems before.

Okay enough blabbering from me; let’s get into the thick of it. The basic building block of a NN is the neuron. The basic neuron is consists of a black box with weighted inputs and an output.

Note: perceptron – neuron that classifies its inputs into one of two categories, basically the ouput of a neuron is clamped to 1 or 0.

The black box section of the neuron consists of an activation function F(X), in our case its F(wSum – T) where wSum is the weighted sum of the inputs and T is a threshold or bias value. We’ll come back to the threshold value just now. The weights are initialized to some small random values and during training get updated. The weighted sum (wSum) is given below.

The sigmoid function has the following graph : 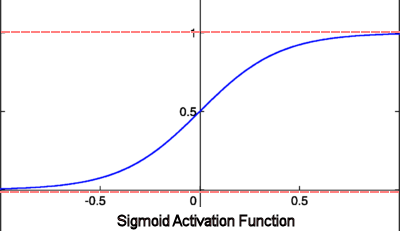 Note: Now its very important to realize that the sigmoid function can never return a 0 or a 1 due to its asymptopic nature. So often its a good idea to treat values over 0.9 as 1 and under 0.1 as 0.

Now we need to cover an important point regarding the input data and the desired output. Lets use the binary OR operator as an example to explain the function of the weights and threshold. With OR we want a binary output telling us whether its true or not, so a single perceptron with two inputs is created. Now the search space for the neural network can be drawn as follows:

The dark blue dots represents values of true and the light blue dot represents a value of false, you can clearly see how the two classes are seperable. We can draw a line seperating them as in the above example. This seperating line is called a hyperplane. A single neuron can create a single hyperplane and the above function can be solved by a single neuron. 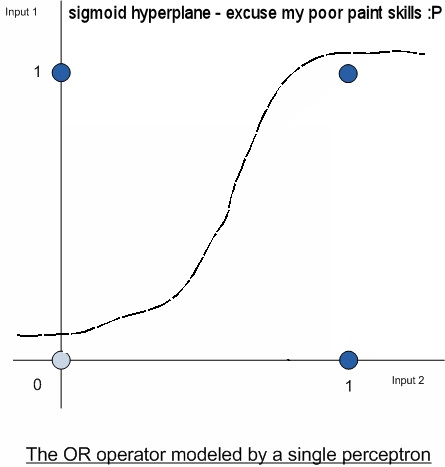 I’m not going to go into the details of how a neuron learns in detail or provide examples; there are many excellent books and online guides to do this. The basic procedure is as follows:

The learning rate term is a term that hasnt been mentioned before and is very important, it greatly affects the performance and accuracy of your network. I’ll go over this in more detail once we get to the weight updates.

As I mentioned before for linearly separable problems a single neuron is sufficient but what about problems that have more than one class or ones where data isn’t so well separated like in the example below:

Here we need at least two hyper-planes to solve this problem so we need 2 neurons. This requires us to link up these neurons together, to link them up we’ll need shared inputs and outputs – in other words a multilayer neural network. The standard architecture of a NN consists of 3 layers: an input layer, a hidden layer and an output layer. There are several proofs available that you will almost never need more than 3 layers (I’ll try get links to the papers soon) and also more importantly we want to keep things simple.

NOTE: you almost never know what your search space looks like, thats why you’re using a neural network, often you’ll have to experiment with the neural network architecture in regards to how many hidden neurals you need to get a good result. 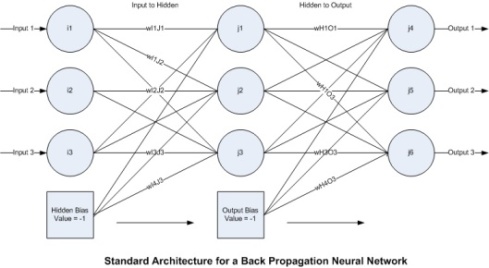 Above is a basic multilayer neural network, the inputs are shard and so are the outputs, note that each of these links have separate weights. Now what are those square blocks in the neural network? They are our thresholds (bias) values, instead of having to store and update separate thresholds for each neuron (remember each neuron’s activation function took a weighted sum minus a threshold as input) , we simply create 2 extra neurons with a constant value of -1. These neurons are then hooked up to the rest of the network and have their own weights (these are technically the threshold values).

This results in the weighted sum + the weight of the threshold multiplied by -1, obviously you can see its the same as we had earlier. Now when we update the weights for the network during backpropagation we automatically update the thresholds as well, saving us a few calculations and headaches.

Okay so far everything has (hopefully) been pretty simple especially if you have a bit of a background in NNs or have read through an  introductory chapter in an AI textbook. There are only 3 things left to discuss – calculating the errors at the output, updating the weights (the back propagation) and the stopping conditions.

The only control over this architecture you have is over the number of hidden neurons since your inputs and desired outputs are already known, so deciding on how many hidden neurons you need is often a tricky matter, too many is never good, and neither is too little, some careful experimentation will often be required to find out an optimal amount of hidden neurons.

I’m not going to go over feeding the input forward as its really simple: all you do is calculate the output ( the value of the activation function for the weighted sum of inputs ) at a neuron and use it as the input for the next layer.

Okay so obviously we need to update the weights in our neural network to give the correct output at the output layer. This forms the basis of training the neural network. We will make use of back-propagation for these weight updates. This just means input is fed in, the errors calculated and filtered back though the network making changes to the weights to try reduce the error.

This is the formula to calculate the basic error gradient for each output neuron k:

The final step in the algorithm is to update the weights, this occurs as follows:

The alpha value you see above is the learning rate, this is usually a value between 0 and 1. It affects how large the weight adjustmets are and so also affects the learning speed of the network. This value need to be careful selected to provide the best results, too low and it will take ages to learn, too high and the adjustments might be too large and the accuracy will suffer as the network will constantly jump over a better solution and generally get stuck at some sub-optimal accuracy.

The BPN learns during a training epoch, you will probably go through several epochs before the network has sufficiently learnt to handle all the data you’ve provided it and the end result is satisfactory. A training epoch is described below:

For each input entry in the training data set:

Where back-propagation consists of :

These are some commonly used stopping conditions used for neural networks: desired accuracy , desired mean square error and elapsed epochs. I wont go over these in too much detail now as I will be covering them in the next tutorial with some training examples. The main reason i’m not going into detail here is that i havent described the training of the network in detail, i need to go over the creating of training data sets, what generalization and validation errors are and so on. All this will be covered in greater detail in the next tutorial.